Fuxi is a symbolic reasoning engine writen in Python.

FuXi is a multi-modal, logical reasoning system for the semantic web. Its primary capability is as a a SPARQL 1.1 RIF Core Entailment implementation. The results in the previous link to the SPARQL 1.1 test result show some of the semantics it supports.

FuXi has these features:

1 Pychinko is a python implementation of the classic Rete algorithm which provides the inferencing capabilities needed by an Expert System. Part of Pychinko works ontop of cwm / afon out of the box. However, it’s Interpreter only relies on rdflib to formally represent the terms of an RDF statement.

FuXi only relies on Pychinko itself, the N3 deserializer for persisting N3 rules, and rdflib’s Literal and UriRef to formally represent the corresponding terms of a Pychinko Fact. FuXi consists of 3 components (in addition to a 4RDF model for Versa queries):

Uses Pychinko and N3RuleExtractor to reason over a scoped 4RDF model.

The rule extractor reverses the reification of statements contained in formulae/contexts as performed by the N3 processor. It uses three Versa queries for this

The FuXi class provides methods for performing scoped Versa queries on a model extended via inference or on just the inferred statements:

For example, take the following fact document deserialized into a model:

Below is a snapshot of Fuxi perforing the Versa query “type(ex:SleepingPerson)” on a model extended by inference using the above rule:

What technique does FuXi use?

FuXi is based on Pychinko, to match and fire the specified rulesr.

Using FuXi, it takes all the facts from the current query context (which may or may not be scoped), the rules from the

2Fuxi depends on Pychinko, rdflib, and CWM (just the 1.82 tarball is sufficient and suggested). Pychinko’s interpreter only uses CWM for it’s N3 log/math/os function implementations and rdflib for it’s Literal and URIRef classes (for representing the correspondig terms of an RDF statement for purposes of comparing them when matching rules). See Yarden Katz’s comments on the original FuXi http://copia.ogbuji.net/blog/2005-05-29/FuXi

The dependent libraries can be downloaded from:

RDF is a directed, labeled graph data format for representing information in the Web. This specification defines the syntax and semantics of the SPARQL query language for RDF. SPARQL can be used to express queries across diverse data sources, whether the data is stored natively as RDF or viewed as RDF via middleware. SPARQL contains capabilities for querying required and optional graph patterns along with their conjunctions and disjunctions. SPARQL also supports extensible value testing and constraining queries by source RDF graph. The results of SPARQL queries can be results sets or RDF graphs.

The Rule Interchange Format (RIF) Working Group was chartered by the World Wide Web Consortium in 2005 to create a standard for exchanging rules among rule systems, in particular among Web rule engines. RIF focused on exchange rather than trying to develop a single one-fits-all rule language because, in contrast to other Semantic Web standards, such as * RDF, OWL, and SPARQL *, it was immediately clear that a single language would not satisfy the needs of many popular paradigms for using rules in knowledge representation and business modeling. But even rule exchange alone was recognized as a daunting task. Known rule systems fall into three broad categories: first-order, logic-programming, and action rules. These paradigms share little in the way of syntax and semantics. Moreover, there are large differences between systems even within the same paradigm.

OWL 2 adds new functionality with respect to OWL 1. Some of the new features are syntactic sugar (e.g., disjoint union of classes) while others offer new expressivity, including:

OWL 2 also defines three new profiles [OWL 2 Profiles] and a new syntax [OWL 2 Manchester Syntax]. In addition, some of the restrictions applicable to OWL DL have been relaxed; as a result, the set of RDF Graphs that can be handled by Description Logics reasoners is slightly larger in OWL 2.

Support for rdf:XMLLiteral support is now optional. Technically, support for any individual datatype is optional and therefore may not be present in a given implementation. RDF-conformant specifications may require specific datatype maps. 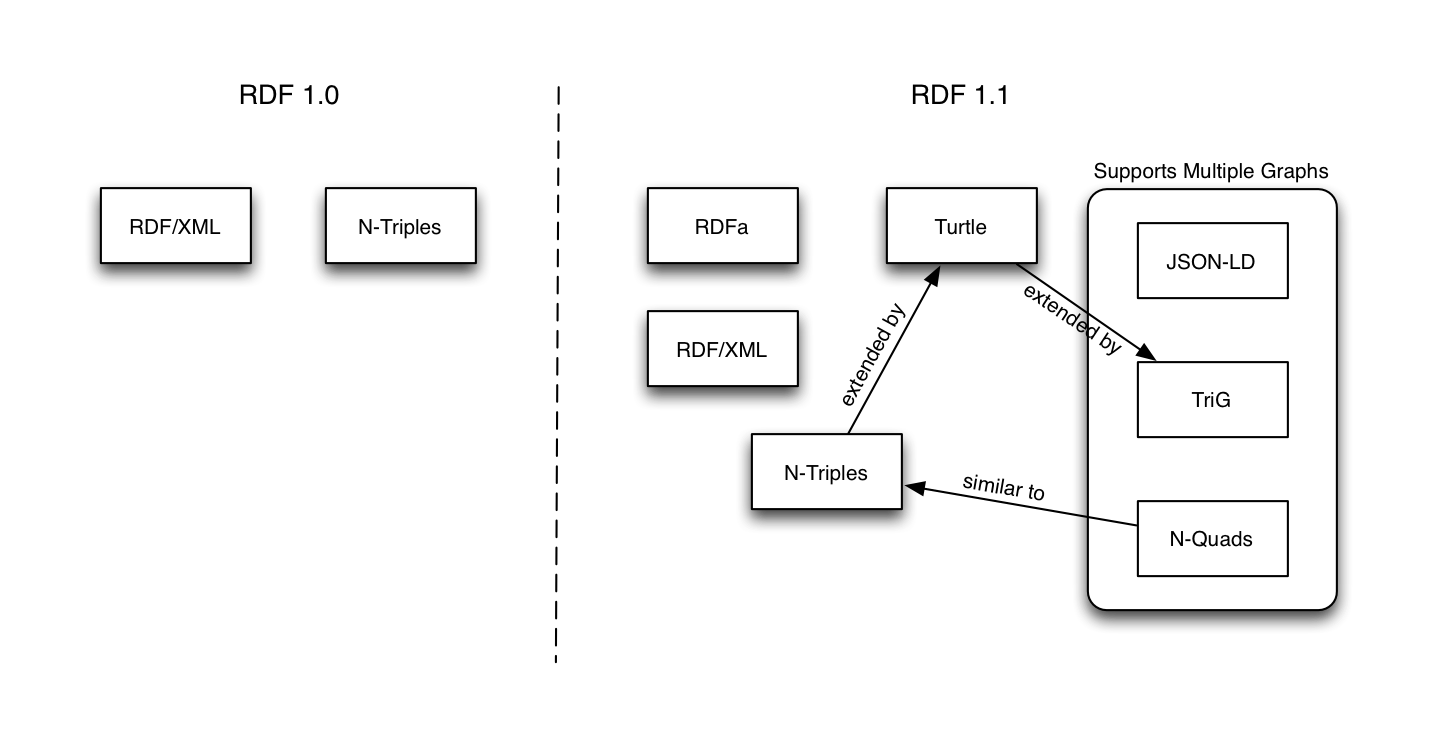 3 N3 is short for Notation 3. Notation 3 provides the notion of a “formula”, and syntax for its use in conjunction with RDF statements. There is not, to my knowledge, a clear consensus about what a formula actually is or denotes, beyond being a “set of statements”. A “context” is described as being a relationship between a statement and the formula to which it belongs. (Interestingly, John McCarthy declined to offer a definition of context in his paper on formalizing context.)

However, it seems that this idea is intended to address the some problems like those introduced above, and maybe more. Example uses of formulae in N3 include things like these, where braces "{...}" are used to enclose a formula:

meaning that it is asserted that the conjunction of the statements in the formula is not true. This is an extreme case of some statements being unreliable.

meaning that in the context of what Lois knows and believes, Superman is strong. But, not posessing knowledge that Clark Kent is the same person as Superman, she believes that he is weak. Someone in posession of the knowledge that they are the same person would have to conclude that Clark Kent is strong. This corresponds to the third case noted above.

The introduction of contexts in the description of Notation 3 seems to be very much associated with the introduction of primitives for expressing full first order logic. This note has a more modest goal, namely the scoping of asserted truths to some collection of statements (formula), and a consequent limitation on the conclusions that may be drawn from some rule of deduction (whose means of definition is not specified).

This is intended to map the idea of "{ N3-expression }" that is used by N3 into an RDF graph upon which RDF semantics is defined.

So, for basic RDF, we have the following abstract syntax for a graph, following a style suggested by John McCarthy :

where isSet(s), isTriple(t), isUriref(n), isBlank(n), isLiteral(n) are primitive functions that recognize the elementary syntactic structures and components in an RDF graph, eachMember(s,f) is true if the function f yields true when applied to each member of the set s, and sub(t), prop(t) and obj(t) are selectors that return the subject, property and object respectively of a triple.

This is extended to account for formula nodes by extending the definition of nonLiteral(n):

where isFormula(n) is a new primitive function that recognizes a formula node.

The 4Suite 4RDF is an outdated open-source platform for XML and RDF processing implemented in Python with C extensions.

Contexts, and Scopes, and Provenance, Oh My!